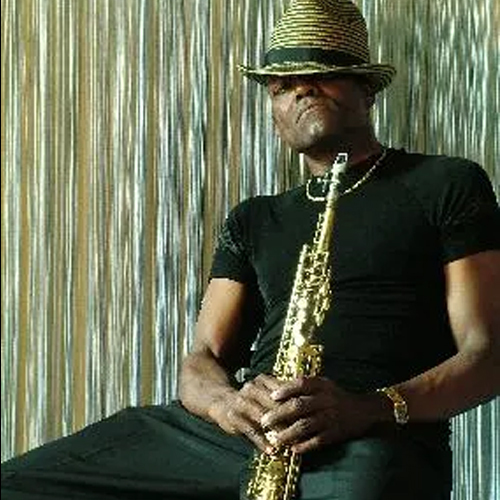 OUTSIDE: Rizer Pavilion on the Workhouse Arts Center Quad

Saxophonist J. Plunky Branch is an experienced performer, songwriter and music and film producer. He is president of his own independent record label, N.A.M.E. Brand Records, through which he has released 30 albums. With his group, Plunky & Oneness, he has appeared in concert with some of the biggest names in Black music, including Patti Labelle, Ray Charles, Earth Wind & Fire, Yellow Jackets, Frankie Beverly & Maze, LL Cool J, Chuck Brown, and more. His song “Every Way But Loose” was a top-ten soul music chart hit in London in the 1980’s and his hit single, “Drop,” was released in 2007. Now in 2019 he continues to produce and tour with his band playing rousing funk, jazz, African, rap and R&B.

Plunky’s European touring has taken him to England, France, Germany, Austria and Switzerland. He twice toured Ghana, West Africa, once for the Ghana National Commission on Children, and again as a cultural specialist for the U.S. Information Agency. He has performed in London and Paris; traveled to Brazil; and visited to Cuba to research and produce music recordings and the documentary film, Under the Radar – A Survey of Afro-Cuban Music.

Plunky & Oneness performed at the New Orleans World’s Fair, the National Black Arts Festival in Atlanta (four times) and twice at the Capital Jazz Festival in Maryland. They have appeared at the Kennedy Center for the Performing Arts in Washington, DC, Lincoln Center in New York the Virginia Museum of Fine Arts and in other prestigious venues. For more than 20 years Plunky has toured continually with support from the Virginia Commission for the Arts (VCA).

In 2018, J. Plunky Branch received the prestigious “50 For 50 Award” from the VCA as one of the 50 outstanding arts persons in Virginia of the last 50 years. In 2015 he was selected as one of the Strong Men & Women in Virginia History by the Library of Virginia.

In addition to being a veteran saxophonist and composer, J. Plunky Branch has served as an administrator, lecturer and teacher.  Plunky is a two-time recipient of National Endowment for the Arts Jazz Fellowships and he was appointed to the Governor’s Task Force for the Promotion of the Arts in Virginia. He attended Columbia University in New York City and he has taught at Virginia Union University and Virginia Commonwealth University, both in Richmond.

Throughout his career Plunky has entertained and taught thousands, and in the process, has developed a broad and loyal following. During his 1987 West African tour, critics proclaimed Plunky "one of the greatest living saxophonist!" In a context where rhythm, ritual, power and emotion reign supreme, he just might be!

This performance will take place in the Rizer Pavilion on the central quad of the Workhouse Arts Center. Tickets are available for purchase from $30 per person. Beer, wine, soft drinks, and snacks available for a la carte purchase in the venue.

Venue and seating will open 60 minutes prior to curtain. This venue is outdoors, within a large festival tent, and may be postponed if inclement weather occurs. If that occurs, ticketholders will be notified via email as early as decisions are made.