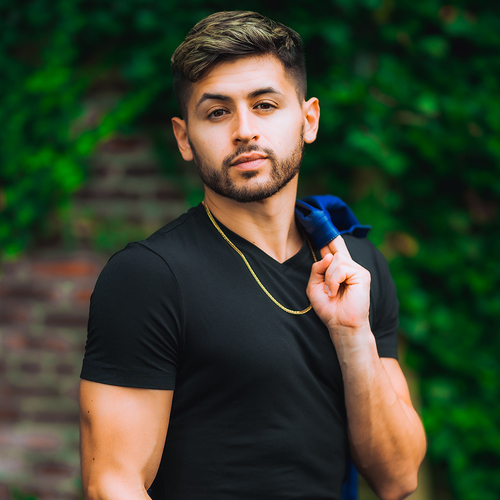 Singer-songwriter, pianist, and producer ​Chris Urquiaga​, known as JChris, is lauded for his exciting performance energy and smooth voice. Hailed as “…the next big thing” by ​Metro Weekly​ magazine, this Latin pop virtuoso is internationally recognized for his pop compositions which are laced with R&B melodies and Latin rhythms.

With his new rebranding, Chris has already seen great success with the release of his latest singles. His latest single, Caliente (featuring major Latin artist Naldo Benny), has reached over 1 million views on YouTube. Chris’ spotify channel has over 500,000 streams.

Chris has co-arranged and co-produced with JohnnyTechAudio for his new sound as JChris. As a team, they have received critical acclaim for their high-quality and edgy urban tracks. Chris has worked with an international team of professionals including chart-topping superstar Naldo Benny for JChris’ “Caliente” music video, and Yurel Echezarreta from the movie West Side Story (Remake) for JChris’ upcoming LGBT-centered music videos Oportunidad and Dime. A vocal a cappella version of JChris’ Macarena has been made by arranger/composer Tom Anderson, whose arrangements have been featured on NBC’s “The Sing Off”. The vocal a cappella version of Macarena written by Anderson will be released in 2022. Chris has also shared the stage with Stokley Williams of the band Mint Condition.

As a gay Latino artist, Chris had the honor of presenting his own headlining concert at Feinstein’s/54 Below in NYC entitled Latin Music Night, featuring guest artists from Broadway and Television. New York is a city that Chris has fallen in love with. In October 2021, he made his Off-Broadway debut performing his original music at the Triad Theatre for a play entitled Dig Deep. In New York, Chris is a music teacher at the prestigious Saint Ann’s School in Brooklyn, teaching vocal and instrumental music to middle school and high school students.

Chris loves incorporating different art styles into his music, whether its dance choreography in music videos, or recreating his songs using household items Chris wants to work with the best of the best to make the best content for his fans.

On top of working with such incredible industry professionals, Chris shows his support for the LGBTQ+ community through his continued involvement with local organizations, along with creating his own drag persona, Cara Linda. Cara first made an appearance in the 2020 music video for “Ya Yo Te Olvidé” and continues to make appearances via her personal Instagram page and Chris’s TikTok.

Chris has always been a rising star within the music industry even before adopting the JChris name. After completing the prestigious Artist in Residence program at Strathmore, Chris released his debut album, ​Complete​: a project filled with original tunes with lyrics in English, Spanish, and Portuguese. A year later, he released ​I’m Here​, a collection of velvety ballads and heartfelt lyrics which was celebrated at the Blues Alley, the historic jazz club in Washington, DC.

Chris’ achievements and accolades led him to receive the Montgomery County Hispanic Heritage Month Award for his achievements in the performing arts and for playing a vital role in shaping that community. In 2019, he was the featured performer for the Hispanic Swearing-In Ceremony for the 116th US Congress. That same year, Chris was featured on the cover of ​Metro Weekly magazine, being described as an artist with a “potent, sweet, and rich voice [with] songwriting skills to match.”

While attending the Eastman School of Music, he composed and performed music for all styles and mediums. His education in music helped him achieve several career milestones including commissions by Congressional Chorus and soprano Carmen Balthrop, and performances for Barack and Michelle Obama at The White House, Feinstein’s/54 Below, and Conservatorio Nacional de Música in Lima, Perú, among other venues in the US, South America, and Europe.

Chris is currently composing a musical comedy about gentrification called “Mr. Manhattan!” with lyricist Jordan Silver in New York City. The musical’s protagonist, like Chris, is also of Brazilian and Peruvian descent.