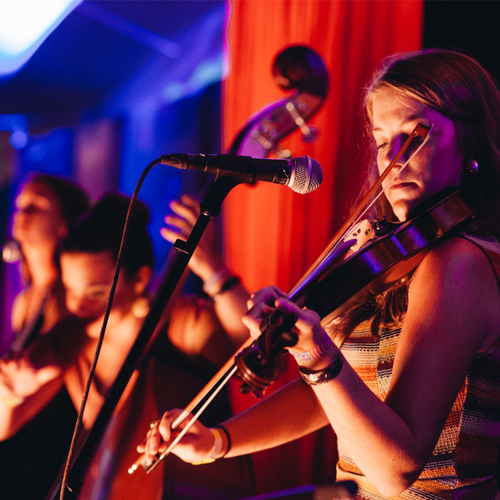 ​After Jack is a musical celebration of togetherness. Combine your most beloved musical memories with a foot-stomping string band and top it off with harmonies that spring straight from the soul of the mountains, and you’ve got After Jack.

After Jack hails from Ferrum, VA, in the foothills of the Blue Ridge Mountains. The all-female trio performs music from, and inspired by, the rich musical traditions of the region. Founding members Rachel and Emily Blankenship-Tucker met in 2010, while working as professional actors in a regional theatre company, The Blue Ridge Dinner Theatre, and its touring production, the Jack Tale Players. During their tenure with the company, they created original theatrical productions that highlighted a variety of traditional musical styles, produced favorite contemporary plays, and carried on the oral traditions of the Blue Ridge region through dramatizations of traditional folklore and songs. This experience served as a catalyst for the group’s creation, and a foundation for their current work. Songwriter Catherine Backus joined the group in 2019, rounding out the trio, and bringing sparkling instrumentals and her own powerhouse vocals to the mix.

After Jack is committed to using their voice to support regional environmental activism. The group has been particularly committed to the fight against the Mountain Valley and Atlantic Coast Pipelines, which threaten Virginia’s water and natural resources, and the safety of rural communities.

At present, the group is working on their second full-length album, which will be released on Travianna Records. This will be the band’s second collaboration with Aaron Ramsey, following their 2014 album, Echo. After Jack’s touring radius has spanned much of the US, including tours west as far as Colorado, north to New England, and south to Georgia. In addition to concert performances, the group also offers educational performances, which can include dramatized folktales featuring strong female protagonists, and performed in story theatre style. The band also offers educational workshops in songwriting, creative writing, storytelling, and traditional music.