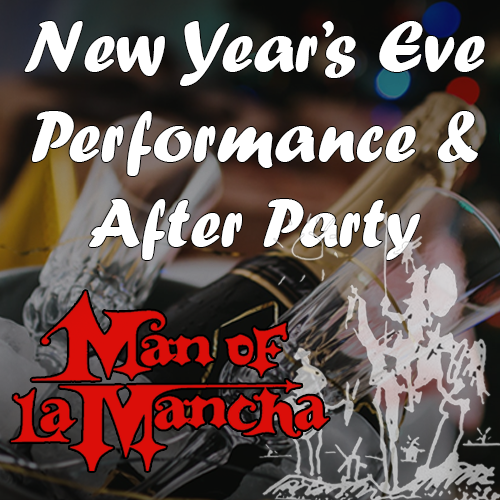 Your combination ticket includes admission to Man of La Mancha and admission to a NYE party following the performance! Help us ring in 2019 in style in our main gallery in building W16. There'll be music, dancing, singing and complimentary refreshments and champagne toast with the midnight countdown! Your ticket also includes two beverage tokens which may be redeemed in the theatre or at the party, additional beverages may be purchased from our bartenders.

Inspired by Miguel de Cervantes’ seventeenth-century masterpiece Don Quixote, MAN OF LA MANCHA is one of the most successful musicals in Broadway history. Powerful, brutal, hilarious, and heartbreaking, MAN OF LA MANCHA celebrates the perseverance of a dying old man who refuses to relinquish his ideals or his passion. The celebrated score includes the classic song “The Impossible Dream” which found its own life after the production, having been recorded by many major popular vocalists.

Miguel de Cervantes, aging and an utter failure in his varied careers as playwright, poet and tax collector, sits in a Seville dungeon with his manservant, awaiting trial by the Spanish Inquisition for an offense against the Church. The other prisoners set up a mock trial: if Cervantes is found guilty, he will hand over all his possessions. Cervantes agrees to do so, and offers his defense in the form of a play, and in doing so the classic tales of adventure (and misadventure) of the errant and noble knight Don Quixote unfold.

A la carte cash bar and snacks available for purchase before the performance and at intermission.

Parking is free and plentiful in our well-lit lots. Best parking is on South side of campus behind buildings 3 and 4. Theatre is located in building 3.

Due to some suggestive content, this production is rated PG-13. Not recommended for young children.