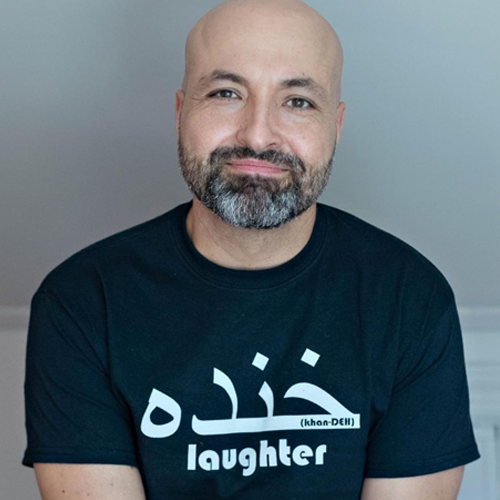 Tickets for this event are not yet available. Online ticket sales will officially begin at:

STAND UP COMEDY AT WORKHOUSE

Comedian Rahmein Mostafavi has hand-picked top-notch stand-up comedians from around the region for an evening showcasing the funniest folks around! The comedians have outstanding credits from comedy clubs through the DMV and the greater region. (Names to be announced here.) Produced with special arrangement for a select series of dates this Spring! Seating is limited and will likely sell quickly!

Q: Will this be indoors or outdoors?

A: Outdoors, in a large covered pavilion.

Q: If it rains, will the show be cancelled?

Q: What kind of seats will you have?

A: The seats in the venue are padded folding chairs, similar to what you might find at an outdoor wedding. Guests are welcome to bring their own outdoor seating, if they prefer.

Q: How many seats will there be?

A: We are following all guidelines from CDC and Virginia state rules for outdoor events. This includes socially-distanced seating between parties and overall reduced attendance. (Guidance is constantly changing, and we will adjust operations, as appropriate.)

Q: Will there be food or drinks for sale?

A: Yep! We will have beer, wine and soft drinks available for sale, along with with movie-theatre style snacks for purchase.

Q: May I bring my own beer or wine?

A: No, as our ABC license does not permit this. Besides, sales at our concession counter support programming like this, and helps ensure that performers (and bartenders!) are compensated for their time and talent- and we thank you very much for that support.

Q: How about parking? Is there a cost?

A: Not at all. We have plenty of free parking in our private lots adjacent to the performance venue.

Rahmein charms crowds with comic timing and charisma developed during a decade of live performance. He addresses social and political topics with a combination of satirical and observational comedy, leaving audiences with a greater sense of purpose, sex appeal and the occasional leg cramp. Rahmein entered the stand-up world after working as a longtime cast member of “Shear Madness,” the acclaimed Kennedy Center improv/comedy whodunit. His natural joke writing ability, combined with his acting chops, has won him rave reviews in both the Washington area and around the country. He also produces events under the “Cool Cow Comedy” banner, bringing live comedy to venues in Maryland and Virgnia. Rahmein has shared the stage with some of the best comics in the nation, including Dave Attell, Jake Johannsen, Artie Lange, Bert Kreischer, Rich Vos, Jon Lovitz, Tim Meadows, Joe Matarese, Bob Marley, The Sklar Brothers, Jen Kirkman, Red Grant, Godfrey, Joe Torry, Kyle Kinane, Finesse Mitchell, and Maz Jobrani. He has been featured at the Laugh Your Asheville Off comedy festival, The Devil Cup, Red Clay, The Cleveland Comedy Festival, and the Cape May Comedy Festival. Rahmein has been seen on FOX, heard regularly on Sirius XM, was featured in “The Truth About Money” on PBS, and was honored to be a speaker at the world famous TEDx Talks.

ADVANCED TICKETS ONLY- NO TICKETS WILL BE SOLD AT THE GATE

(Early purchase is strongly recommended, as previous performances have sold out)

Socially-distanced outdoor style seating will be provided within our large tented pavilion.

Tickets for this event are not yet available. Online ticket sales will officially begin at: