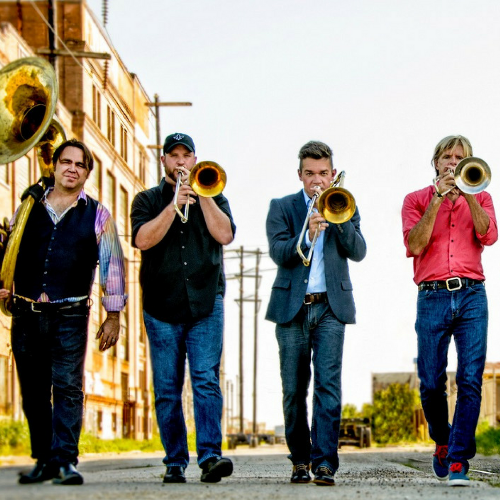 ***ONLINE PRESALES HAVE ENDED. BUT TICKETS ARE AVAILABLE AT THE WORKHOUSE BEGINNING AT 4PM ON SEPTEMBER 2ND*** Join us in the Rizer Pavilion for an incredible concert by New Orleans brass funk rock band Bonerama! Before the concert, local food trucks will be on hand starting at 4pm, soft drinks, beer, and wine will be sold a ala carte.

Best described as “unlike anything you’ve ever heard before,” this 20 year old powerhouse touring band from New Orleans, LA, Bonerama has been changing the way people think about the trombone and has become an influence and contribution to the sound of New Orleans music today. With newer acts such as Trombone Shorty and Big Sam’s Funky Nation on the national music scene, it’s New Orleans that has benefited with a newfound reputation as being a bonafide “Trombone Town”. These bands all carry the trombone like the trophy it truly is in New Orleans. Bonerama helped cement this in present day New Orleans music culture.

Before the concert, local food trucks will be on hand starting at 4pm, soft drinks, beer, and wine will be sold a ala carte.

NOTE: Blankets and lawn chairs welcome. Pop-up tents, outside food, alcohol, or drinks (other than a sealed bottle of water) are not permitted. Thank you for your cooperation.